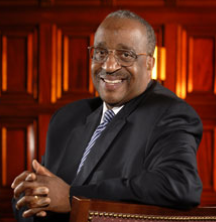 Dr. David G. Carter, the retired chancellor of the Connecticut State University System (CSUS) and beloved Board President of The Michael Bolton Charities, died after a valiant decades-long fight against an array of illnesses at age 75, on March 17, 2018.

During his five years as Chancellor, Dr. Carter led the four-university system through its greatest expansion in academic, program and campus development. In his final year as chancellor in 2011, CSUS reached an all-time high of 36,629 students at its universities.

A highly accomplished and widely respected educator and administrator, Dr. Carter became the first African-American to lead a four-year institution of higher education in New England when he was selected to serve as President of Eastern Connecticut State University (ECSU) in 1988.

During his 18-year tenure leading ECSU’s campus, he boldly transformed a small campus with a limited number of degree offerings into an advanced and diverse educational haven — and meticulously realized his vision, building Eastern’s reputation as “Connecticut’s Public Liberal Arts University.”

Dr. Carter, an education administrator at the University of Connecticut prior to leading ECSU, was appointed chancellor of CSUS in February 2006. His experience as a public college president who worked closely and effectively with state government and the business community enabled him to lead an effort that resulted in the State providing funding for a $950 million commitment to update and upgrade the four campuses in the CSUS System. It was the most comprehensive expansion in the shared history of the universities, and a transformation that extended years after he retired and continues to benefit current students.

At a memorial celebration of the life of Chancellor Carter on June 9, 2018, Michael Bolton said of Dr. Carter, “He had an uncanny ability to know not only what should be done, but how to get things done.  He believed, to his core, in the importance of our mission, and I could not have asked for a better, more talented, more tenacious, more effective person to lead our Board.

A man of great principle and honor, he drew wisdom from his experiences. When it came to doing the right thing, he never wavered.  Whatever the obstacle, whatever the challenge, he firmly believed that, regardless of what others thought, you should “give the world the best you have, anyway.”  He left an indelible mark on our organization, and his inspiration continues to drive us forward, each and every day.”

Retired State Supreme Court Justice Lubbie Harper Jr. said at his passing that “Dr. David Carter was an exceptional human being. He had a strong sense of justice, and insisted on every individual being treated fairly. He possessed a superior intellect yet was extraordinarily humble. He acted on his belief that his purpose, given his own life experiences, was to reach back whenever and wherever he could to assist those in need of an opportunity. He was the consummate educator, and able to easily relate to all people, regardless of their background or station in life.”

Dr. Carter began his career as a teacher, principal and administrator at public schools in Ohio. He then spent four years on the faculty in the College of Education at Pennsylvania State University, followed by 11 years at the University of Connecticut before becoming the President of ECSU.  At UConn, he was a professor of educational administration and Associate Dean in the School of Education, in addition to serving as Associate Vice President for Academic Affairs.

“What always stood out most to me about David Carter was his compassion,” recalled Michael Bolton.  “It was a constant and profound quality, and it was evident in every opinion he voiced and every decision he made. Compassion was the quality, more than anything, which defined who he was.  The lasting impression he left with me was his heartfelt application of compassion, for every human being.

David Carter believed deeply that each of us could – and should – make a difference.  And he surely did.  He will remain in our hearts forever.”