Board of Directors Spotlight Spring 2022 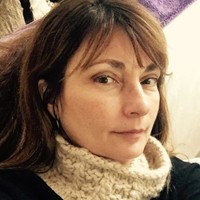 The mission of The Michael Bolton Charities resonated with Eva Bunnell immediately.  Having grown up in a household characterized by violence, it has been a “difficult journey to healing,” but one in which she has consistently sought to prevent others from having to confront what she faced as a youngster.

The best way to do that, which she believes and exemplifies, is to “roll up your sleeves and get involved,” and shine a light on what’s wrong, advancing prevention efforts aimed at ending the cycle of aggressive behaviors and alleviating the suffering in their aftermath.

Recollections of her formative years “will always be a part of who I am,” she explains, driving her involvement and leadership to achieve what she heard a behavioral scientist friend describe as “behavioral inoculations” through initiatives such as The MBC’s Beyond Trauma – Youth Music Therapy program.

Michael Bolton’s personal commitment – using his celebrity to bring attention to these critical issues – and the research that led to the program’s establishment, reflects a commitment that Eva sees as the foundation for even greater impact.

“What the music therapy program does is reveal to these students that there is a way to integrate feelings, to regulate and understand emotions.  When they’re able to do that, they’re less likely to be violent.  They have another path they can take.  We know this works.  We can do this.  Now, we must get effective programs like this to scale, so we can reach more people and truly break the cycle.”

She cites the parable of an individual who is standing along water’s edge downstream, repeatedly pulling people who are near drowning from the water, as they float by, one after another.  Until it is suggested that perhaps a look upstream, to determine the cause and fashion a remedy, would ultimately be more effective.

What the Beyond Trauma program does is focus on the cause, to prevent dangerous or self-destructive behavior, thus helping individuals, families and, ultimately, communities.

The past two years of COVID has only heightened the imperative, she notes.  “There’s an upward trend now, and frightening statistics.  And what’s happening impacts all of us.  Which is why more education, more awareness, and more intervention is necessary.”

In a career that is perhaps best described as giving back and moving forward, Eva Bunnell has shown both incredible resilience and steadfast determination as a leading child advocate.

Working in the office of Congressman John Larson, where she rose to the position of Senior Policy Advisor and District Director, her efforts included advocating for legislation to help military families who have children with autism, efforts to increase positive outcomes from federal funding for children and families, and the creation of the First Congressional Youth Cabinet. She earned a Congressional award for Exemplary Public Service, in recognition of her outstanding accomplishments and achievements. She has also served as Director of Government Affairs at Connecticut Children’s Medical Center and as a member of a task force called “National Call to Action: A Movement to End Child Abuse and Neglect.”

A month ago, Eva Bunnell was selected by President Biden to serve as a member of the President’s Committee for People with Intellectual Disabilities. The national committee advises the President and the Secretary of Health and Human Services on matters relating to persons with intellectual disabilities.

It is a subject with which she is intimately familiar, as her first child, Jacinta, was born with significant physical and medical needs. Her devotion to her daughter’s extensive challenges, in fact, helped to propel her own healing from the travails of her youth, enabling her to be the “good mom” she was determined to be.  Eva appreciatively describes the many ways she learned from Jacinta’s life, and how she was inspired.

It also led to then-Connecticut Senator Chris Dodd to introduce the Family and Medical Leave Act in Congress, which became law in 1993, a reaction to the roadblocks and hurdles that similarly situated families faced in workplaces and with insurance companies in providing their children with the medical care they required.

“I’m excited for the opportunity to participate on the President’s Committee, to help achieve meaningful change to help families and their children,” Eva says, “and to be a genuine voice of people who have experienced these situations first-hand.”

Memories of her daughter’s struggles, and her many successes through the years, accompany Eva as a member of the Committee. Jacinta defied the odds for more than two decades, passing in 2009 at age 26.

Looking at the work that lies ahead as Board President of The MBC, and as a member of the President’s Committee for People with Intellectual Disabilities, Eva’s determination is plainly evident.

“Because Michael Bolton has provided a long-standing commitment and voice, to the work of eliminating violence in homes and communities, I am excited that progress can be made,” she says. “And nothing is impossible if you believe something good can happen out of such dedication.  And I do.”